Apparently, I was briefly unemployed Friday.

I didn't find out about it until after the situation was remedied, but my position was one of the 15 or so that was terminated in my company this month.

I didn't learn about this until during a meeting with my deparment, when the president of the company asked me if the head of Manufacturing had a chance to talk with me.

Through round-about ways, my bosses found out what had happened--by deduction, that I wasn't on the invite list for the departmental restructure rap-and-luncheon. And the head of Manufacturing had just radically increased his duties, and his staff pool. So he saw that I was on the list of people to be terminated.

After that, apparently, a lot of voice mails were sent, since my bosses very much want to keep me around, and I guess I've left a favorable impression with manufacturing. Probably from all the darn tech support I give them.

Anyway, I have a new job now. I don't know what it is, they don't know what it is. Probably inventory control. Wheee, more numbers. I can't say I'm totally happy about that--it's kind of interesting, I guess, and I'll be able to legitimately spend company dollars on buffing my Excel skills to freakish heights, but it doesn't make my creative side gush with joy.

It's nice to be wanted. Distressing to have been "downsized", even though it didn't affect me. There may be a small raise in the end, I'm not sure, since I'm not exactly receiving a "promotion", more of a lateral step. I'll learn more on Monday. 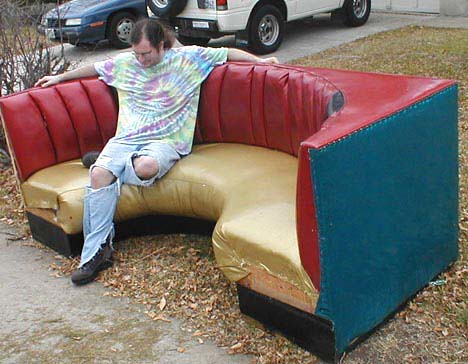 That's it for me and my lovely bowling alley couch. It's a beautiful thing, but we're looking at consolidating and downsizing, and I've got to be rational about this one--it's likely Whines and I will be moving into a condo eventually, and I just can't afford the space it takes to keep this baby.

So, before I put it on Craig's List, any takers from my friends? You'll need a pick-up truck to drive Mr. Couch away, and either a very large door or a sliding glass door that you can take apart to get it into the house, but it's a NEAT piece of furniture, once it's inside.

Church had a silent auction tonight. Got some good deals, a three-hour session with a small business consultant for mom, and a real estate appraisal for only $85 for myself. Not bad.

Donated four hours of MS Excel training to the church. A couple with a small business doing photo permissions bought it for $70. Hope I'm worth it!

The woman they were bidding against was...strange...a little old woman who wanted attention more than lessons. She was auction-trolling. I'd never heard of that before.
Collapse