Every year, we go to the street across the river to see the fireworks and have a picnic, slogging ice chest and chairs across the field to find a good seat. This year, mom got an invitation to a fabulous old queen's July 4 party. It was in his large, complicated house, stuffed with odd little antechambers, memorabilia, the signs of an 80+-year-life, well spent and well worth every year.

This is in a really posh neighborhood--we drove past Lance Armstrong's house, several starter mansions, and one or two castles, winding up Mount Bonnell.

When the fireworks started, we all went outside, up a tight metal staircase to a deck on top of his house. All of Austin spread out around us like gold dust--we could see as far as Round Rock, a full city away--someone pointed at the house next door and said that was the highest point in the county, but it wasn't more than ten feet higher than we were. The view was breathtaking.

The huge, looming fireworks were petite from where we were standing, but there were other displays. Round Rock, Elgin, someone thought they saw Bastrop--we could see all their celebrations, too. Some were nearly invisible red flares on the horizon. Not only did the cities and suburbs have their display, but every backyard firework that could fly above its house, every contraband roman candle, green flares by the University of Texas tower, sparkling clouds over the lake--we could see all of them, like the entire county was celebrating together.

I'm not much for patriotism, it's too often a lash to drive the mob forward, but this was special. Sometimes I'd look at fireworks and think about how many other people were celebrating at the same time - like a gunpowder-laced communion - but here, I could see rockets and bursts of flame sparkle across the full spread of the city that I love, and felt just a little pride to be a part of this explosive-happy, crazy nation.

I've posted this one to "Found Objects." It's almost not fair to post there after a trip to one of the big retail trade markets. But this lovely lady needs the attention. She was propped up in front of a high-quality chef's supplies showroom. 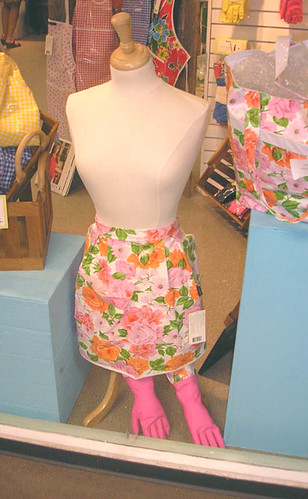 Never ask her to make an upside-down cake.
Collapse