Me: "Mr. Realtor, what do I do now?"
Mr. Realtor: "Nothing, really. It's just lawyers signing things at each other for the next two weeks."

Argh! I hate waiting and not being able to do anything! I've started randomly packing boxes, just to have something to do. We're probably not moving for amother month yet, but at least there's activity of some sort.

In the meantime, here's the kitchen: 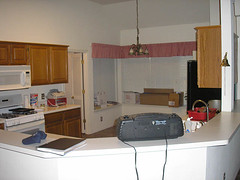 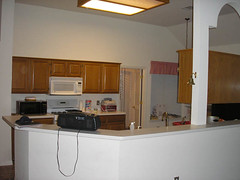 I love the kitchen. I'm not sure how I feel about the funny little window-benches that form an inset seating area in the kitchen, and I have my doubts about the microwave over the stove, but beyond that, yay, kitchen.

I'm going to have to SERIOUSLY work on my cleaning habits, though. The kitchen's in a major public area, so I'll need to at least keep things scrubbed down twice a week.

Dsukit's decided to become the scourge of unmentionables, a devourer of smallclothes in the night. Eeek!

Mildly irritating, but I'm worried--if we take the extreme step of locking her out of the room at night, how will she slake her unnatural desire for underpants? Will anyone be safe? She's not a small dog--we could be in trouble if she goes for underwear straight from the source...

*is going commando from now on*

Looking at the calendar, and the way my vacation days are plotted out, I think that the best day for moving Casa de Chukar will be the weekend of November 3-4, probably Saturday, November 3. Failing that, the weekend of the 10th-11th, but I'd rather do it the week earlier to give myself more time to clean up the old house, and let...certain people who may also be moving...take advantage of the ample supply of boxes.

I can't say this for certain, but we would have had the house for two weeks at that point, hopefully enough time to do the painting we need, and ideally we can have moved a lot of the little weird stuff over via cars...so it'll be mostly furniture. Of course, volunteers will be amply rewarded with fooood. Probably not so much with the beer, though.

Went from Inventory to Finance to check on some paperwork. Whilest wandering the hall, I heard madrigals bursting forth from a closed meeting room. These faded into women's plainsong, very pretty and ethereal.

This is not the strangest thing I've dealt with at my office--that would have to be the team of 20 executives dressed as mariachi, with a Great Horned Owl--but it would be one of the most pleasant.
Collapse