For the record, my unwelcome-but-interesting visitor is probably a "Dog's Vomit slime mould," arguably the least pretty of the species. Many slime moulds have ornate fruiting bodies or spore producers, but this beastie settles down, turns solid, and converts its internal structure into a blood-red mass of spores.

This is the second one of these critters I've had. I don't think they're particularly harmful, they mostly eat mulch, but they're unattractive and I'm not too sure I want my mint covered with slime mold goo.

Still, they're interesting creatures. I'm a bit of a fan of them, after watching a documentary on slime molds some 10 years ago (I was in high school, I think, so more like 15 years ago now, sigh).

Since this beast is more or less unkillable, I'm sure he'll re-appear somewhere else the next time I garden...I'd been joking occasionally about wanting a pet slime mould, but not this particular species, it's unusually disgusting :) 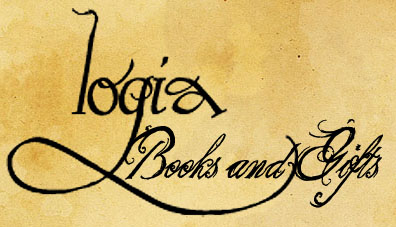 Since I can basically "chunk" the Logia concept into a few broad categories (Events/meetings/conversationspace, bookstore/gifty retail stuff, cafe/restaurant), there's not a pressing reason not to have a few different logos, one for each major purpose and one for higher-level usage (like business cards, splash pages, etc). So I'm still playing with ideas...none of these have really "grabbed" mom yet.

I think I like the overall "diner" look, but the panel in red at the bottom probably should have been done in another neon-type font, maybe less ornate than the top one, probably yellow with maybe two words that blink in and out.

Both of these should really be re-tooled with a little more time, they're kind of rough sketch...
Collapse