Just wrapped up a special little lunch with Whines, nothing too fancy, a nice little trip to Lockhart for some of that fine, fine barbeque. We were going to go to Kruez's, but that was not to be--there was a massive line of people out the door, and a school bus out front! Whoops!

Ended up going to Smitty's instead, one of the other two big BBQ joints in the town, which is pretty well-known--arguably nationwide, since they've been featured on Food Network--for their barbeque.

Of the big three, Blacks I think is the most accessible, it's got a more restaurant-style layout and lots of side orders, a bit cafeteria style. They've also got turkey, which is kind of nice, if a little bland. And sauce, which some people seem to require.

Kreuz's and Blacks split apart a while ago when the family broke apart, one half getting the old historic building (Kreuz's), and Blacks' getting the name, at least as far as I can tell. They're both pretty good.

Kreuz's has dry-rub briscuit as a specialty, with okay sausage (I'm not a big sausage fan). Excellent briscuit, but don't ask for sauce or they frown at you. It's kind of a hostile experience all around--you enter a big warehouse, go over to the cooks, ask for meat, and pay in a seperate room--it's a bit intimidating if you're used to sit-down restaurants and are in a low-risk sort of mood.

Aaanyway, Kreuz's being crowded, we went to Smitty's, which is pretty similar to Kreuz's in terms of serving style, but with even fewer options and no forks as far as I can tell. They pride themselves on this--both are "eat off sheets of paper, use your neighbor's sleeve as a napkin, do NOT ask for salad, and get out. Y'all come back, y'hear?" establishments.

There was a pretty big line at Smitty's, too! We were in a narrow, smokey hallway, eyes burning, for a good 15 minutes. Toward the end, we were standing about two yards from the smoking pits, which were exposed mesquite bonfires on the floor! 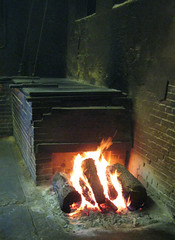 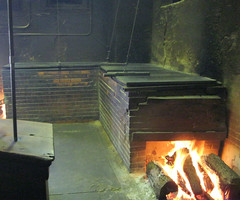 It was v-e-r-y warm there, and we were having a hard time even imagining what it would have been like a week ago, in the 110-degree time of year. 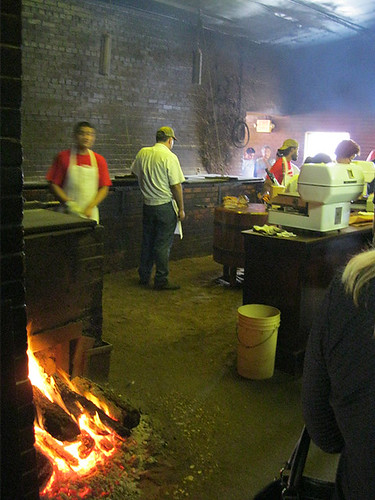 Here's the interior. Note the textured "grease smoke and dirt" wall, the sexily massive butcher block in the middle, and the extreme proximity of photographer to bonfire. Yay!

Lunch was nice, though, lots of briscuit (not as good as Kreuz's), a bit of sausage (better than Kreuz's, or at least a more mellow flavor). A bit of pork ribs, too, but I'm not much of a judge of those.

Enjoyed the 40-minute drive through the country, even if we did get a warning from a cop. The scrubland is covered with acres and acres of a flower I don't recall seeing before, with pale, starfish-like petals. Very pretty.