Character reference stuff: [fades] is a blink dog, baaasically a teleporting dingo/wild dog from the long-ago Dungeons & Dragons edition, cerca 1985. The species has evolved over the years to a more wolfy look, but we will be ignoring this. Original blink dog illustrations, I'm mostly going with the "blink dog leaping" illustration with a slightly longer tail:

kiraxlee. The head's a bit too wedge-shaped, but the overall look is good, and I like the vest, tail, and mood of pic.

Another good reference pic, from Coyotepuck: This one's got the best head shape: 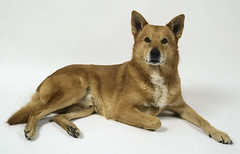 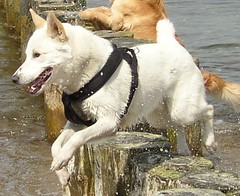 Clothes: Usually wears an ornate ethnic vest, embroidered, somewhere between gypsy and polka. How much detail is purely up to the artist's patience :)  I like the pattern on the second of these vest illustrations, but the cut is from a waiter's uniform.

Beyond that, tends to wear scruffy jeans, tee shirts with a teleportation theme (Nightcrawler's "BAMF" logo, "beam me up", or something). These aren't really important, too much detail makes for busy pictures.

Coat: Back, sides, most of legs are on average a light brown. Belly and throat are labrador-dingo colored creamy gold.

Accessories: The only one that's really important is the blue glasses - round blue-tinted specs with, if it's relevant, straight legs:

Other body notes: Tail is labrador-length, but narrower, with a leonine tuft at the end, dog-flexible but not cat-flexible--the tuft would be halfway down calf on a human body shape).

If naked and this is relevant, groinal parts are canine. May be wearing some leather cords loosely bound around base of tail, because that look amuses me.

General attitude--explorer/traveller, with a generally thoughtful  expression but not a lot going on upstairs. "Surfer and backpacker with a second-hand copy of 'Howl' trying to pick someone up by faking a philosophy degree."

Also, his species (again, old school D&D) teleports a lot--one artist shows them teleporting in a flash of light, for what that's worth, which is very little. I don't think it's important, since that's hard to represent graphically, but it's part of the character.